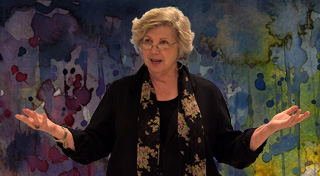 THE VIDEO IS HERE! In this landmark presentation Marsha Linehan, PhD the developer of DBT, reveals that she had been institutionalized as a teenager – likely as a result of BPD.

According to the DSM-IV to meet a diagnosis of BPD, a person must exhibit at least five of nine symptoms (criteria).

BPD tendencies typically arise in early adulthood; however, some individuals begin to show symptoms of the disorder much earlier.

The primary difference between BPD and adolescent behaviors is that during adolescence these symptoms occur for brief periods of time, whereas a person with BPD is likely to have more long-lasting and constant episodes.

The connection between BPD and other mental illnesses is well established. People with BPD are at increased risk for anxiety, depression, eating disorders, and substance abuse.

There is no single medication specifically developed to treat Borderline Personality Disorder. However, there are medications to treat other conditions that can occur along with BPD.

People with BPD have a great deal of trouble controlling their emotions. Events that may seem routine to most non-BDP people often trigger extreme emotional reactions in those with BPD.

Making and maintaining relationships with other people is often difficult for a person with Borderline Personality Disorder because their broad range of extreme feelings and behaviors tends to push others away.

Learn more about the CAUSES OF BPD

Unfortunately, BPD is often underdiagnosed or misdiagnosed. As a result many people who have BPD go untreated for years.

Studies suggest that about 60% of the risk for developing BPD is due to differences in the structure of the brain.

In addition to the role of the brain, negative social interactions such as a turbulent environment at home, school, work, or among peers increase the risk for the development of BPD.

Long-term research studies of people with BPD suggests that the majority of them will experience long-lasting periods of remission in their lifetime.

Learn more about TREATMENTS FOR BPD

According to the National Institutes of Health, 5.9% of the U.S. population has experienced Borderline Personality Disorder– about 18 million people.

1 out of 5 people admitted to psychiatric hospitals and 1 out of 10 people seeking outpatient mental health treatment have BPD.

Nearly 75% of people diagnosed with BPD are women, but recent research suggests that men may be almost as frequently affected by BPD.

Sometimes, when a person with BPD is in crisis hospitalization may be necessary. Suicide is a very real concern for persons with BPD. Overall, the total percentage of people with BPD who commit suicide is about 8-10%.

How do families learn to cope with Borderline Personality Disorder?

What is the difference between a psychologist and a psyciatrist?

Online communities for persons with BPD and their families