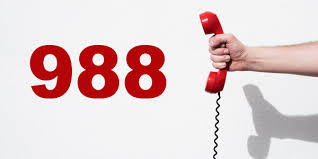 Incidents of suicide and suicide attempts have dramatically increased around the world. The Covid-19 virus pandemic, along with  political and social unrest, likely have and will continue to push the numbers even higher,

But in the face of those dark clouds a glimmer of light recently emerged that should provide greater support for people contemplating suicide.

Recently, the U.S. mental health advocacy organization, The National Association on Mental Illness (NAMI) petitioned and successfully lobbied the U.S. Congress to take up and pass a resolution – the National Suicide Hotline Designation Act of 2020 that authorizes the use of an emergency telephone line for people who are contemplating taking their own lives. Similar to the familiar 911, the new intervention number will be 988. The new three-digit number will not be operational until July 2022. Until then people experiencing a mental health crisis can still call the  National Suicide Lifeline at 1-800-273-TALK (8255) or text “NAMI” to 741741 for help.

Suicide attempts and fatalities are increasing in the US.  According to the American Psychological Association, incidents of suicide among Americans  rose 33 percent from 1999 through 2017, growing from 10.5 to 14 suicides per 100,000 people per year, Suicide currently ranks as the fourth leading cause of death for Americans ages 35 to 54, and the second for 10- to 34-year-olds.

Suicide prevention is also an international concern. Canada has several mental health support organizations who provide hotlines. In the UK the National Health Service also lists a number of organizations that offer support to individuals in distress.

In fact, most countries around the world now have emergency hotlines and other resources for people in dire need of support. Here is a list of most, if not all, of them.

If you have a crisis emergency plan in place, or if you are thinking about creating one, please find and add the appropriate contact information for support where you live.