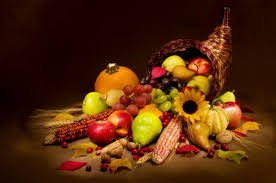 This Thursday (11/28/19) is Thanksgiving Day in the US. as it recently was in Canada as well. The overarching themes of this holiday (beyond all the eating) are refection and gratitude, i.e., giving thanks for the people and things in our lives that are most meaningful.

Expression of appreciation are generally considered ‘good for the soul’. Turns out they are also powerful mood enhancers as Glenn Fox, Ph.D., a post-doctoral researcher at the University of Southern California’s Brain and Creativity Institute recently illustrated — literally— in a study of the brain

In the study, Fox and his team provoked feelings of gratitude in 23 participants in their 20’s who had little or no personal connection to the Holocaust. Each participant listened to recorded survivor stories while their brains were scanned using MRI technology. The stories they heard included detailed specifics about survivors receiving life-saving gifts, such as food, shoes, medicine and shelter, randomly from strangers. “These stories are full of gratitude,” Fox says, “often for very specific things, like people who took tremendous risks and hid them or gave them a pair of shoes.”

The MRI scans showed increased activity in the area of the brain – the medial pre-frontal cortex – responsible for positive feelings. In other words, the experience of genuine gratitude can stimulate positive emotional sensations. According to Fox, boosting gratitude “is a really low-tech intervention that can help people feel better.”

It’s something you might think about on our national day of giving thanks.