Personality Disorders Are Nothing to Laugh About 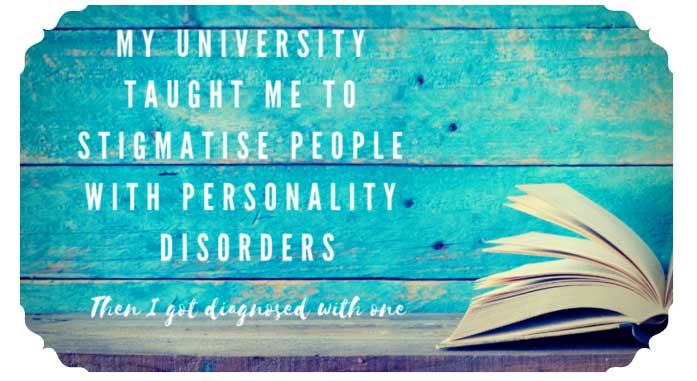 Recently, a person I follow on Twitter invited me to read a blog that she writes about her experiences living with Borderline Personality Disorder. Her name is Lorna.

In 2016 Lorna graduated from university with a degree in Psychology. She was diagnosed with BPD 3 years later. Her blog posts describes her life’s experiences in a vivid and deeply personal style.

Her latest blog recounts an incident that occurred when she was a second year student nearly 6 years ago, well before she received her diagnosis of BPD.

Lorna tells the story of a psych lecture she attended on personality disorder, which, like many of the other 100 students in the hall, she knew very little about.

After reviewing the symptoms, prevalence and treatment options for each of the 10 different types of personality disorders, the professor presented the group with an exercise that used humor as a teaching method : “Imagine a Party Where Everyone Has a Personalty Disorder”. That party included 10 imaginary people who openly manifested unusual and sometimes obnoxious behaviors. The students’ assignment was to identify which Personality Disorder each of those party goers displayed.

According to Lorna, the professor had sharpened his presentation to the point where he quickly “had the entire lecture theatre howling with laughter over these freaky people and their wonky personalities”.

But when she had been diagnosed with one of those disorders and recalled that lecture, Lorna failed to see the humor. “I wish my lecturer could see the potential damage this activity could cause to those suffering and find a way to provide a compassionate introduction to Personality Disorders.”

When I read Lorna’s post a personal experience of my own immediately came to mind. When my daughter was in college and took a similar class in psychology she mentioned to the lecturer that her parents were professionally involved in creating educational videos about mental illness, including Borderline Personality Disorder. She added that we likely would be happy to share some of that. Her professor immediately declined, claiming that “nothing can be done for those people”.

As with Lorna, my daughter’s professor was also perpetuating a stigma that long has been unfairly applied to people with serious mental disorders such as BPD.

Despite advances in the understanding and treatment of people with personality disorders, particularly among people with BPD, this teaching approach does not reflect those advances. Nonetheless, if you Google the title of the exercise: “Imagine a Party Where Everyone Has a Personality Disorder”, you will see that it is still in use at a number of colleges and universities.

Thank you for bringing this to light, Lorna.

What are your thoughts about this? You can enter them below.

Create your own review
Personality Disorders Are No Laughing Matter
Average rating:   0 reviews